Rattlesnake Give Away
Happening Now!
Enter to Win! 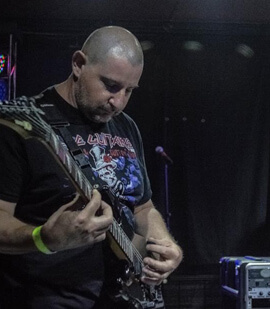 AJ is the lead guitarist of From Ashes (thrash/post Hardcore). Fun and playing shows are keywords for the quintet from Orlando.

AJ is from the Northeast, born in Wilmington, DE, growing up there and Gloversville, NY. Currently residing in Orlando.

Fan of all music. Identifying most with Hardcore Metal Punk!

He was introduced to the guitar as a kid. He studied with great guitar teachers, his last teacher Vinny (RIP) of Vishnu Music, Johnstown, NY.

Playing style has been described as right on the beat, taken off guard by how Hardcore it is, thrash influenced with some industrial ideas, and having something in solos.

Be you, don't beat yourself up about being completely original. Just have fun making your favorite music! You don't need any theory, scales, or anything else. They NEED you!

Electro-Harmonics Nano Metal Muff - it sounds good and has the flexibility of a variable noise gate that can really tighten things up or let the feedback fly!

FLAMMA FS21 Drum Machine - don't actually have this pedal but I would love to try it! The ear says a different drum beat on the same riff can change everything!

Electro-Harmonix Grand Canyon delay there's so many sounds you can get out it. Harmonies, delays, shimmer, it's all there. Plus, it's a looper.

Here's one to try. Take something your always playing; what you're in the rut with works too. Make more of it, higher and lower in pitch. With that, as your idea makes more stuff that gets along with it in that soundscape, derivatives of the first idea are fine.

Make as many long strings of licks and riffs as you'd like. Stay focused only on what lives in that soundscape.

Continue to play it here and there when the idea fits how you're feeling or just as a regular practice. Then break pieces off of it to put in songs. The possibilities are endless; run wild with it!

Change is the only constant. Let's dive in; the waters fine.

Ok, so, Not many changes in the music. Still into the same stuff as ten years ago. A lifelong fan of Hardcore Metal Punk! Then and now!

Lot's of stuff from around NY, NJ, Mass, Conn, PA - NYHC ! and stuff based around Troy/Albany NY - Troycore!

Let's get deep, the changes!

Got into 2x4, our band From Ashes came together because of them - if we could do something half as brutal as 2x4 - Disbanded now, some of the musicians in that band went on to form Frost Koffin .

As far as actually listening to music, streaming services are a game-changer.

The gears turning when listening has changed instead of just listening because of the love of it, all the time. There's listening for specific ideas like technique, tone, drum beats, its mix, you name it you can listen for it!

What's driving the listening has changed too, with a driving force behind the wheel on a lot of journeys. Stuff like checking out Harms Way, Municipal Waste, and Type-O before a show. Or stuff like checking out musicians, becoming more of fan the players in the bands that keep this engine running.

It starts with one band, and over time there's a legacy of all this music they are part of. There's a long road of slammin' stuff between these bands with a web between them: Stigmata, Burning Human, Overcast, Shadows Fall, Killswitch Engage, Death Ray Vision, Overkill, and more!

Through this idea, you can really see how musicians come together to help each other, and here's this sound we make!

And then there's all this overseas stuff, Celtic Frost, then Discharge and GBH via checking out NYHC's Sheer Terror.
Napalm Death via learning about drum programming.
Bullet For My Valentine and Asking Alexandria though friends.
Children of Bodom, Nevermore then Arch Enemy via Rockhouse guitar DVD's
Vader via listening to Slayer on Spotify.
Jinger and Rise Of The North Star via Hard Core World Wide on YouTube.

It's hard to find left-handed stuff in stock, plus it's hard to find a good music store to hang in. Have been in more of a habit of going to Sam Ash in Orlando. It's gotten way better there over the years.

Dropped tunings helps because of playing upside down on right-handed guitars, and any single string idea works great. Mostly what happens is flipping what's played upside, like power chords are minor 3rd shapes and stuff.

You can come up with some different sounds that way, too.

There are a few, another practice amp to keep with the pedalboard and a backup guitar, bonus points if it's the same as the main guitar. 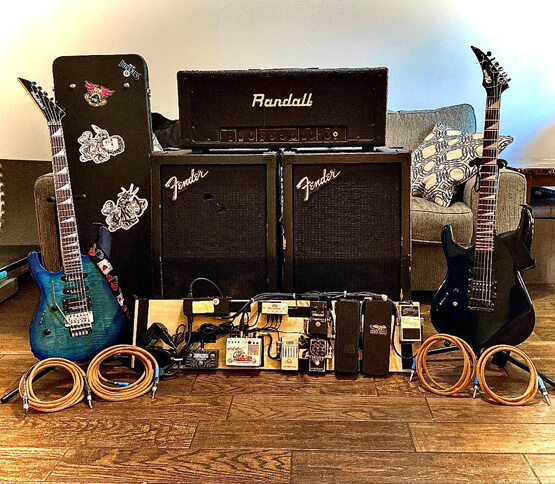 Main guitar:
Custom Jackson DK2L Dinky with a Dimebucker. Huge shout out to LRC Guitars in Longwood, FL for their amazing craftsmanship from good people who have your back!

Teaching guitar:
Series 10, I think a DiMarzio is in the bridge.

The Rockboard makes it look cleaner with cables going to a single unit.. The Boss TU-3 is easy to see and reliable. The wailer wah is cheap and good, before the distortion like the way it sounds there.

The Maxon compressor next to bring up the signal, get more harmonics, plus looking for a more consistent sound with legato/tapping. It's on all the time and before the Metal Muff.

The Metal Muff wanted to try something fuzz to try and give some fullness to a thin sound that just didn't sit right. That was before the Dimebucker, though. It's also a noise gate. Set around 40% distortion or less, mids 60%, treble and bass around 40%

The MXR EQ for lead boost. The Grand Canyon next, used in just one song (Hideaway) right now for its shimmer and by total accident live too!

The Volume pedal is last cause it cuts all sound there. It's actually the most used pedal. I like to do stuff like raise the volume on sound where it would normally decay. What's happening live on the song Nothings any better is a good example of that.

Using copper Rattlesnake 10' cables with snake head at the guitar. You never need to think about cables. They just always work. They make set up and break down a breeze, with them being easy to identify and wrap.

On the pedal board, there's a mix of Pro, Flex patch, and homemade.

Connecting the head to the cabs are copper Rattlesnake speaker cables.

All this is sitting on a cheap board from the hardware store. Got the idea from the guys in the band using dresser doors. How cool is that!

Current
From Ashes - for fans of Thrash, post-Hardcore
For booking: fromashescontact@gmail.com

READ ANOTHER TESTIMONIAL
See what people are saying about Rattlesnake! Over 1000 testimonials and growing!

Lars Andersen
8/31/2021
Big fan of the cables, especially the Snake Head feature. Great quality and great service, cables seem built for a lifetime of use. I have bought several times and the service is always great and consistent.

Tim Stephens
9/8/2021
I’m a touring musician in a band out of Texas and I was on the search for the ultimate cable company that could build me high quality, touring grade cables for my Sennheiser wireless belt packs. I was recommended by a friend from Nashville to go to Rattlesnake Cables in Montana as he uses them... Read 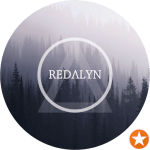 Red Marcus
2/26/2021
Amazing quality and the best customer service I have ever received! Hank is great!

Lars Andersen
8/31/2021
Big fan of the cables, especially the Snake Head feature. Great quality and great service, cables seem built for a lifetime of use. I have bought several times and the service is always great and consistent.
Close

Tim Stephens
9/8/2021
I’m a touring musician in a band out of Texas and I was on the search for the ultimate cable company that could build me high quality, touring grade cables for my Sennheiser wireless belt packs. I was recommended by a friend from Nashville to go to Rattlesnake Cables in Montana as he uses them personally and said that their customer service, integrity and excellent quality cables are second to no one. I sent an email to Hank to enquirer about building me some custom cables and he was extremely helpful AND knowledgeable in every aspect of the build. When I received the cables I had a few fly in shows in California to try them out and they are absolutely superb cables, built like tanks and great looking too, which I really like. In short, Rattlesnake cables are the very best and nobody could convince me to go anywhere else for my cable needs. They blow the mainstream plastic cable companies out of the water and I love to spend my hard earned cash on a great American made product! God bless you Hank, and I hope to be in touch again soon for some other custom looms. Tim
Close

Red Marcus
2/26/2021
Amazing quality and the best customer service I have ever received! Hank is great!
Close
Need a coupon?