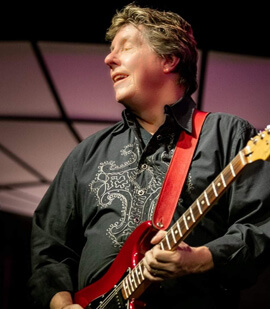 I Started playing guitar seriously by joining a band at 14 years old. I was never going to be the captain of the football team, so I had to find another strategy to get dates.

Toured with Snowblind for four years in the early '80s. Then went to college and started my career in advertising.

After not playing for almost thirty years, I started going to jam sessions in Boise. Had so much fun. I bought some gear. About a year later got hired on with the RJ McGinnis Band. We gig around the Boise area almost every weekend as a "roadhouse classic rock and blues band."

Like everyone, I was a fan first. I played ukulele in grade school, which led to an acoustic guitar when I was 12. That led to forming a band at 14. I was a huge Led Zeppelin fan, so Jimmy Page was my primary influence and inspiration. Still my favorite guitar player, with Jeff Beck a close second.

Take the lessons! I had one of the great jazz players and teachers, John LaChapelle, living in my town of Richland, Washington. He wanted to teach me jazz, but I wanted to learn blues. A huge mistake in my musical journey

I love to learn new tunes and play live. At 62, I've found a whole new musical life that I would never have expected. And we're a hard, blues-rockin' outfit. I play better now than ever, and I look forward to playing and learning new stuff all the time.

Wah pedal: I think that's the pedal that makes all players, new and journeyman, find a new level of expressiveness

My custom dual-drive pedal: Built by a guy in Nashville. Combined JHS AT and Greer Lightspeed. Both pedals are awesome and give me a really broad palette, from transparent boost to full-on grind -- with the ability to stack as needed.

Plethora X5: I was looking for something that would fit on my small board and give me more flexibility and real-time control with my onboard Katana effects. Surprisingly, it was my sax payer that had it on his board and turned me on to it. Nine different TS effects with TonePrint options, easy to change parameters on stage, and sounds great.

The "blues box." I spend a lot of time learning how to not get stuck in the pentatonic rut.

My favorite band recently is The Pretty Reckless. Ten years ago, it was the Foo Fighters. My all-time favorite is Led Zeppelin.

When you find yourself in a music store - what is your go-to riff when test driving gear?

I have a diatonic, two note-riff that I wrote years ago that I could modify for different clean to full-on metal sounds. Because it uses open strings, it's a great way to see how an amp or effect rings out.

My Katana Artist MK II. It's a killer modeling amp that takes pedals well. In fact, I used it with only the GA-FC controller and a Wah pedal for over a year. 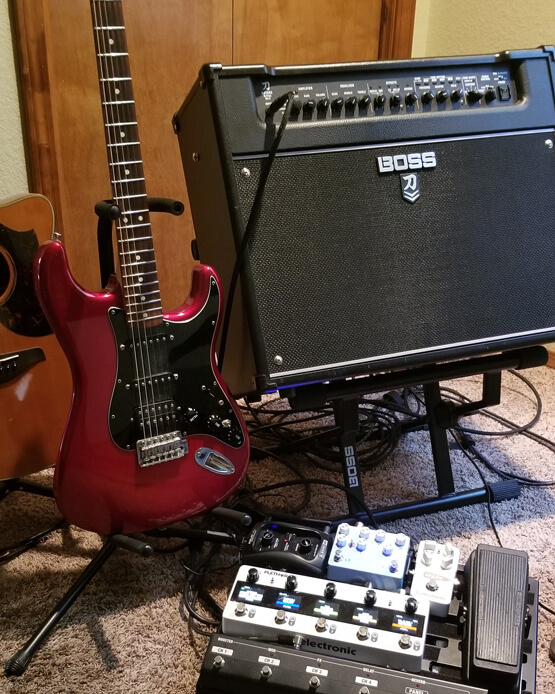 Hector Badilla
8/20/2022
Customer service is hands down the best I’ve ever dealt with. The cables themselves actually might be the most durable/hearty duty ones I’ve ever had in my 22+ year music “career”. Hank and team have my total support.

Marius Kozokar
12/12/2021
Amazing group of people making amazing products. From the cables, to the splitter boxes, and even their merch, it's all quality. Would recommend to anyone.

Hector Badilla
8/20/2022
Customer service is hands down the best I’ve ever dealt with. The cables themselves actually might be the most durable/hearty duty ones I’ve ever had in my 22+ year music “career”. Hank and team have my total support.
Close

Marius Kozokar
12/12/2021
Amazing group of people making amazing products. From the cables, to the splitter boxes, and even their merch, it's all quality. Would recommend to anyone.
Close
Need a coupon?