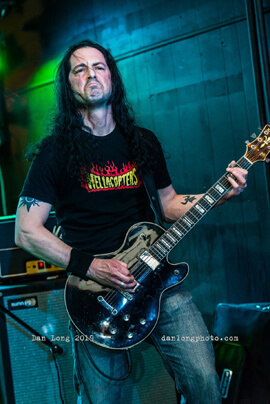 I started as a drummer, so I always had that drive to play music. I was a kid when Maiden and Priest got big and suddenly you had Metallica and Slayer and Overkill and Metal Church bringing this new more bombastic sound. So I learned how to play from all those drummers. Years later, when I switched to playing guitar, I was mimicking all the guys who were inspirational to me: Tony Iommi, Pepper Keenan, Matt Pike, Fast Eddie Clarke, Adrian Smith, and on and on. But the first guy that really made me go, "I want to play like that sonfoabitch!" was Wino. Listening to The Obsessed, Spirit Caravan, and the Hidden Hand, was like going to college for me. I would study those riffs, how they're constructed and built into a song. And I learned a ton about soloing from Wino. There's an anxiety and insanity to Wino's guitar solos, but at the same time, they're very musical and have a vocal quality to them.

Learn to create songs not compositions. You learn to write by stringing together riffs. And that's a great way in. But over time, you start to realize which of your songs are just collections of riffs and which ones have a cohesive completeness to them. Resist the tendency to be riffy and focus more on thinking about how the layers of a song work together (especially the vocals)

Making new music. That is the only thing that has permanence to me. To have that tangible record of "I created this." It also marks a progression in your thinking (hopefully) and where your head was at at a particular place in time. Even if you still see the flaws, it is a part of the journey to where you are now. Playing shows can be great, but if its not in the service of making new music, it loses its luster after a while.

- Peter Cornish TB-83: no knobs, nothing you can adjust other than your volume knob and attack on the strings. And yet, it's a perfect overdrive. There's a reason all the British heavy guitarists were using this thing in their heyday. It just makes you sound that much bigger. Even though I'm a fuzz junkie, more and more these days, I've been going back to that original rough overdrive guys like Rory Gallagher, Malcom Young, Brian Robertson, and Leslie West had.

- Catalinbread Belle Epoch delay: I've never heard a delay this rich sounding before. Just head and shoulders above everything barring getting yourself an actual tape echo from the 70s (but who wants to maintain one of those these days?).

- Earthquaker Devices The Depths optical vibe: I went years without using a vibe pedal. Then I got this and realized I'm an idiot and there where so many different ways I could've used this to add texture to songs. I also find its a good source of creativity when I'm feeling my way through a riff. Paired with an echo, it's gold.

I try to listen to music constantly. I need that constant influx of inspiration. And I find if I go through a dry period, where I'm not listening to as much music, that's usually when the creativity dries up. You need input of different ideas. I used to be a writer as well, and I found I wrote best when I was reading someone whose work really inspired me. The same applies to music.

That's a hard thing to peg. If you asked me ten years ago, I would've said The Obsessed. But I also might have said Nick Cave & the Bad Seeds depending on the day. If you asked me now, I might say Motörhead. Or I might say the Swans. I think the one thing that hasn't changed is that music can't stay vital forever. What moves you a particular point, stops moving you after a while. It's hard for any artist to consistently surprise you. It doesn't mean they suck. It just means your dedication to their art is pegged to that first moment of discovery. But hell, there's so much music you haven't heard before, you just gotta keep digging for new things that move your soul.

Whatever will drive the music store person insane in the shortest period of time. My record is 3 seconds.

My '79 Marshall JMP amp head. It's the piece of gear that is used for 99% of what I do and it's the amp that allowed me to really find my tone. I know a lot of folks slag Marshalls these days, and I think some of that is fair criticism based on the quality of their product after the 1980s. But that JMP has a distinct character to it that you feel the moment you turn it on and hit the first note. Even if I'm playing a different guitar, that amp head has been a consistent source of inspiration for a lot of the music I've created. And ask anyone who's stood in front of it at an End of Hope or Eternal Black show. It's loud enough to knock you down.

I've really been wanting to swap the speakers in my Orange 4x12. More and more, I think four vintage Vintage 30s sound really flabby in a single cabinet. There's no crispness to the tone. You get good bottom-end, but you're missing the sizzle in the mids. I've found my old Sunn cab that has Celestions up top and original Sunn speakers below sounds way better. So I'm thinking of trying out a pair of Greenbacks up top with the Vintage 30s down below. I think that might be what Friedman Amps does with their 4x12's and I know that Dave knows his shit, so I'm nicking it. 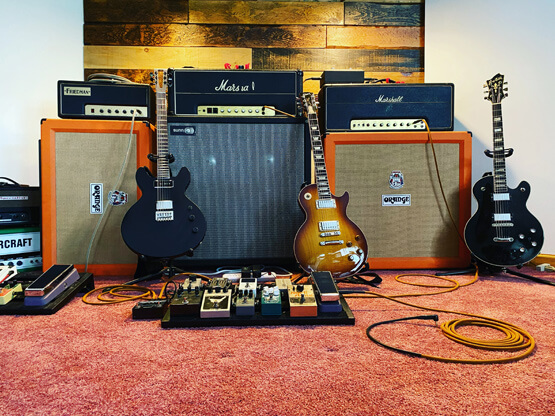 I learned a lot from Wino, Neil Young, and Rory Gallagher in terms of really driving your amplifier to its breaking point and then using the volume knob to control the dynamics. Basically, I always want as much volume as possible coming out of the amplifiers (but the gain dialed back) and then I use stacked layers of overdrive in the signal chain to drive them.

When I'm recording or in rehearsals, I use a two-amp setup with a '79 Marshall JMP and a '73 Marshall Super Lead. They're really loud fuck-off 100-watt amplifiers that actually measure out at 120 watts each when you crank them. I prefer these older models because I don't use the amp to get my full distortion. I want super-loud semi-clean overdrive on the backend. The JMP runs into an original Sunn cabinet from the 70s (with different speakers top and bottom) and the Super Lead will run into an Orange 4x12 (with Vintage 30s). In front of that I'll have either a Wren and Cuff Box of War fuzz pedal or a Black Arts Tone Works Black Forest (for more 70s hard rock tones) as the main source of distortion. Then I'll also run that signal through an MXR six-channel EQ. I only use that to lift the lower-frequency, bass tones. But it's a secret weapon. Those EQ pedals add a slight bit of overdrive, so in addition to the fuzz or overdrive pedals, you've got this additional push layer. When that smacks into the amp, the sound is rich and dense, but your amp and cabinets still keep a crispness to them. So you don't get a flabby sound that a lot of people wind up with when they just are running fuzz into an already heavily distorted tube amp. I use an original Budda wah to shape certain riffs and for solos. That wah pedal also adds overdrive to the signal as well, so when you stomp on it to kick into a solo, it gives you another additional layer to push the amps. When I'm playing live, I just roll with the JMP and the Sunn cabinet.

Switching to Rattlesnake Cables made a huge difference in the over-all tone. Noticed it from the first time I tested them at the rehearsal space. Because I'm front loading a lot of overdrive, any extra noise in the signal muddies the sound (the bad dirt you don't want). Rattlesnake cables eliminated tone loss, so everything sounds incredibly warmer, and eliminated signal noise (so nothing but the good dirt gets through to the speakers). I'm using standard cables between pedal board and amps, and a snake head cable from the pedal board to my guitar. Then Rattlesnake standard speaker cables connecting the cabinets to the amp heads.

Melissa Baldwin
12/26/2022
Bought the wrong cables for Christmas. Hank emailed Christmas night and had the new cable purchased by 9:00 am December 26th. I wish I needed a thousand cables, that is how much I appreciate the customer service I was given.

Christopher Clarke
1/24/2022
Rattlesnake Cable Co. makes excellent products, at a competitive price point. Their customer service is also exemplary! I recommend their gear to anyone needing the best cables and patch gear. The order turnaround time is also amazingly fast! Do yourself and your sound a favor, you won't regret it.

Oliver Runte
12/28/2021
Excellent customer service! I have never seen anything like the Rattlesnake instrument cable. It's built like a tank, solid construction. No loosening on the ends, the cable will last for decades if not centuries. All my future cables will be Rattlesnake.

Melissa Baldwin
12/26/2022
Bought the wrong cables for Christmas. Hank emailed Christmas night and had the new cable purchased by 9:00 am December 26th. I wish I needed a thousand cables, that is how much I appreciate the customer service I was given.
Close

Christopher Clarke
1/24/2022
Rattlesnake Cable Co. makes excellent products, at a competitive price point. Their customer service is also exemplary! I recommend their gear to anyone needing the best cables and patch gear. The order turnaround time is also amazingly fast! Do yourself and your sound a favor, you won't regret it.
Close

Oliver Runte
12/28/2021
Excellent customer service! I have never seen anything like the Rattlesnake instrument cable. It's built like a tank, solid construction. No loosening on the ends, the cable will last for decades if not centuries. All my future cables will be Rattlesnake.
Close
Need a coupon?